It's been another really good week for the Wander team. We made some great progress with level design and rock placement, HUD / UI art, terrain textures, lighting, hosting and more. We also got one of the most difficult bits of the coding done, and you can now see when another player picks a flower, that the flower disappears. Many of the team are quite tired today though after Melbourne hosted the amazing White Night festival last night.

We've started setting up a few more servers ready for the start of alpha testing. We're using Microsoft Azure and some dedicated hardware for the servers. Azure so far seems amazingly painless to use. I've set up Amazon EC2 a number of times before and found it quite fiddly. Getting things going with Azure was quick! There is still a few more things  to work out before we've got all that done but it's good to have made some progress.

Thursday was a day of things breaking, when the version control system we were using decided not to work. I suspect the problem would have been fixable but the benefits it was bringing were too small for the amount of additional effort to use it. We've now swapped from Plastic SCM to a combination of AeroFS and Git. Hopefully this will be more straight forward for us.

We've got some big plans for this week and as soon as we've got the tropical planet light mapped we will be releasing some more pretty screenshots.
Posted by Loki Davison at 20:36 662 comments:

This week we are focusing on level design and getting all the rocks and trees place nicely on our tropical planet. Then we're progressing onto placing the waterfalls, lighting and the tasks (quests and puzzles). We've finished the terrain and textured it and we're very happy with how that's looking. Garth has been doing a great job there.

We will have some pretty picture of that in the near future, but for the moment we've got a prototype of the interface, featuring the ideas for the character morphing menu (the thing in the middle of the screen, it will contain pictograms of each character) and shelter indicator: 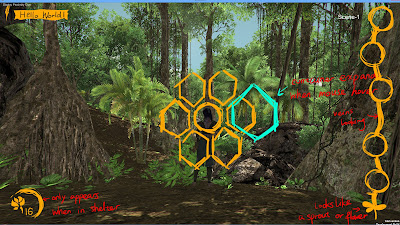 And we've got a stone tile showing the first bits of our writing system. 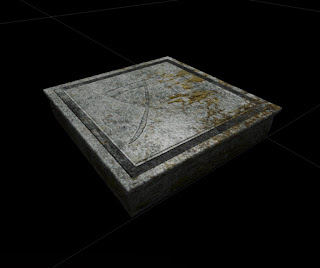 The writing system is inspired by the one used by the Naxi people in Yunnan, China.  http://en.wikipedia.org/wiki/Dongba_symbols

We've got a pretty form now for accepting alpha / beta tester applications,
fill it out if you're keen to test Wander
Posted by Loki Davison at 11:27 107 comments:

We spent a bit of time on the weekend setting up a Facebook and IndieDB page for Wander. This blog and our twitter will still be the main places for updates. We've got a very exciting week planned, with new pictograms for character unlocks, colour grading, final terrain texturing and a few more of the quests.
Posted by Loki Davison at 11:34 150 comments: